Billabongs, bofedales, bogs, boinkas, floodplains, mallines, marshes, oases, pans, playas, swamps, vleis, waterholes …. wetlands in drylands (WiDs) have highly diverse characteristics and an equally diverse set of local and regional names.  This page will highlight some of the more unusually-named WiDs.  We welcome input from people who may have greater experience with some of these WiDs, and who may therefore be able to provide some insight into the origin and application of the terms than might otherwise be obtained from published papers or reports.

But first, a more fundamental question: where did the term ‘wetlands in drylands’ originate?

According to Moss (1980), the term ‘wetlands’ – as opposed to ‘wet lands’ – arose from a classification scheme devised in the 1950s by the United States Fish and Wildlife Scheme (USFWS). Thereafter, the term has become widely adopted as an all-inclusive term for describing lands that are ephemerally, seasonally, or permanently inundated by fresh and/or salt water, including in the title of academic textbooks and journal papers. [Nb. the Merriam-Webster online dictionary states that the first known use of ‘wetland’ was in 1669 but provides no supporting evidence, and may not be distinguishing between use of ‘wet land’ and ‘wetland’].

The term ‘drylands’ – as opposed to ‘dry lands’ – is proving harder to pin down. Here too, the term is likely to have arisen in American English, possibly in the 1950s in the arid lands programme papers of the United Nations Educational, Social and Cultural Organization (UNESCO). As an umbrella term for describing land that is subject to high but variable degrees of aridity, it also has since become widely adopted, including in the title of academic textbooks and journal papers. [Nb. the Merriam-Webster online dictionary states that the first known use of ‘dryland’ is in 1893 but again provides no supporting evidence].

As far as we are aware, the first known use of ‘wetlands in drylands’ in the title of an academic journal paper was by Scoones (1991) but if other information is forthcoming, we stand to be corrected.

Scoones, I. 1991. Wetlands in drylands: key resources for agricultural and pastoral production in Africa. Ambio 20: 366–71.

A billabong is a seasonal or intermittent wetland formed within an abandoned meander loop (or, oxbow lake) adjacent to the main channel of a river. Some billabongs in arid regions take the form of waterholes which occur at the confluence of two smaller channels and terminate shortly thereafter. The term billabong loosely translates to “dead rivers”, reflecting the boom and bust cycles of wetting and drying in the arid interior of Australia.

If you have ever been in the middle of a dunefield and all of a sudden stumbled across something that looks like a saltpan but couldn’t figure out how it got there, then the following may help you work it out. The accumulation of salt that you are seeing is a result of evaporation of groundwater discharge in the basin-like area of the dunefield that you are standing in. This distinct landscape feature is known as a boinka. Not to be confused with the Australian town of the same name but from which the term arose, a boinka was first described by Macumber (1980) while studying the Mallee dune fields of southern Australia. The Raak Plain boinka in northern Victoria is one of the largest in Australia at approximately 550 km2 (Figure 1) (Jacobson et al., 1994). 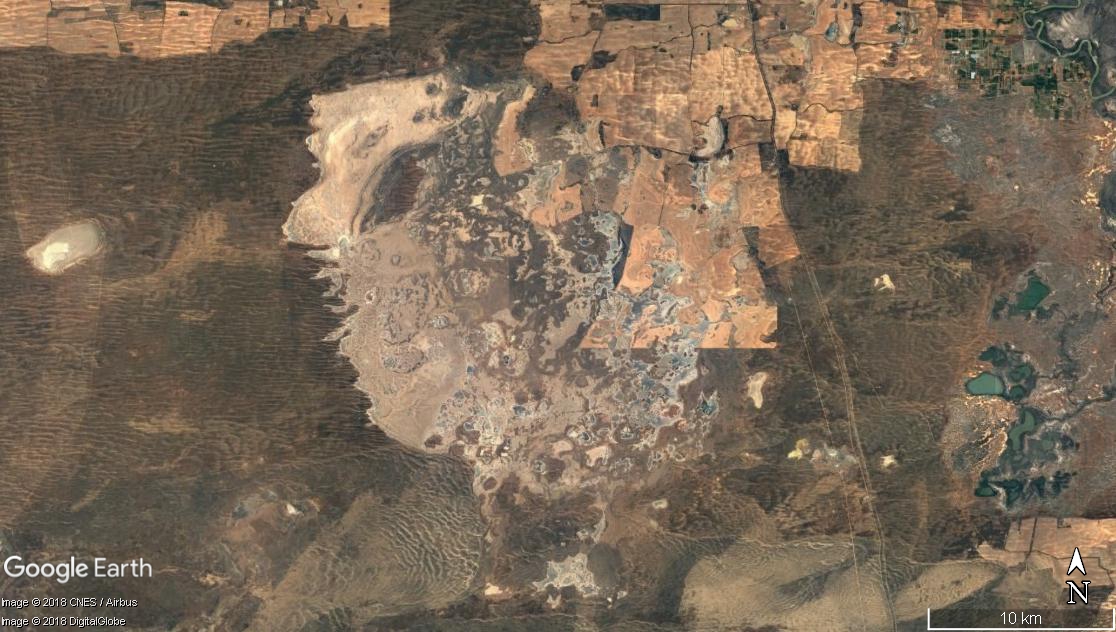 A boinka is usually found in a linear dune field (Macumber, 1980, 1991) and tends to be a broad shallow depression that forms in response to groundwater-controlled deflation (Urbano et al., 2004). This derivation from groundwater-surface interactions makes boinkas a unique landscape feature. In larger boinkas, it is evident that tectonic events have occurred below the basal clay of the dunefield. Fracturing of the clay allows the groundwater to move to the surface and discharge (Macumber, 1991), with the minerals in the groundwater creating the surficial salt crust (Jacobson et al., 1994). A boinka is not a single geomorphic unit but rather a collection of geomorphic units creating a single landscape feature (Figure 2). A boinka landscape may have sand and gypsum-clay dunes, sand plains, clay and limestone plains, gypsum flats, and halite salinas (Macumber 1991). 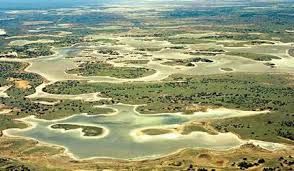 Boinkas often provide a unique insight into climate and land-use history (Macumber, 1991). Archaeological exploration at the Raak Plain boinka in northern Victoria has uncovered a number of artefacts from indigenous occupation that are dated to around 7650 ± 100 years. Among these artefacts are shells from a fresh/brackish water resident, the mussel Velesunio (Macumber, 1991). This find not only demonstrates human occupation at these sites but it suggests that under prior climatic conditions, these boinkas have stored abundant low-saline water, as possibly derived from rainfall.

Macumber, P., 1980. The influence of groundwater discharge on the Mallee landscape. In Stornier, R., and Stannard, M., eds, Aeolian landscapes in the semi-arid zone of southeastern Austrlia, Proceedings of the Australian Society of Soil Science Conference, Mildura, 1979, p. 67-84.

‘Ciénega’ (alternatively spelled ‘ciénaga’) is a regional, Spanish term which describes mid-elevation (~ 1000–2000 masl), marshy areas that occupy headwater valley bottoms in the otherwise arid southwest USA. Most ciénegas have developed over the past 8000 years (Holocene) through fine sediment accumulation atop older (Pleistocene) deposits.1 Accordingly, ciénegas have formed on headwater channel floodouts and small floodplain pockets and may also occur on parts of relict terraces, on floodplains, and within channels. These wetlands are typically maintained by groundwater (springs and seeps) but are commonly supplemented by surface flows from adjacent stream channels.1,2 Associated vegetation communities include aquatic, semiaquatic, and riparian distributions of sedges, rushes, and grasses with few trees.2

Many ciénegas have undergone cycles of erosion and deposition linked to changes in climate over the past several thousand years.1 Major ciénega erosion occurred after colonial expansion through the western USA in the 1800s.3 Ciénegas that once spanned entire valley bottoms developed extensive gullies, regionally termed ‘arroyos’, which lowered groundwater levels and degraded the wetlands.1,2,3 The cause of this widespread erosion is still debated but has been attributed to a combination of changes in precipitation and overgrazing.3 Presently, very few pristine ciénegas exist, and most contain some form of gully or channel incision.2,3 Various management strategies have been used to restore eroded ciénegas but with mixed results.1,3

Ground-level view of the near-pristine Cloverdale Ciénega in southwest New Mexico. Photo from Cole and Cole (2015).

1Cole, A., Cole, C., 2015. An Overview of Aridland Ciénagas, With Proposals for Their Classification, Restoration and Preservation. The New Mexico Botanist, 4, 28-56.

The word ‘vlei’ (plural ‘vleis’) is an Afrikaans word for wetland that is believed to have originated from the Dutch word ‘vallei’ (valley) and has been recorded in written text since the 1800s. It is a commonly used term in southern Africa, and is used in many formal wetland names in South Africa (e.g. Groenvlei, Seekoeivlei), Namibia (e.g. Sossusvlei) and Zimbabwe (e.g. Zungwi vlei).

Vlei is best defined as a stretch of low lying ground that is either permanently marshy or is flooded in the rainy season to form a shallow lake [1] but is used rather broadly for a range of wetland types, including floating bogs (Vankervelsvlei), lakes (Groenvlei – Figure 1), pans (Sossusvlei – Figure 2), and valley fill and floodplain wetlands. Vleis can form in various topographic lows, ranging from active or inactive dune fields (Sossousvlei, Vankervelsvlei – see Irving and Meadows, 1997) to valley bottom (Wakkerstroom vlei – see Joubert and Ellery, 2013) and floodplain type settings (Hlatikulu vlei – see Grenfell et al., 2009). Vleis are net depositional landscapes and span various dryland climates from hyperarid or arid (Sossusvlei) to subhumid (Hlatikulu vlei). In drier regions, vleis are mostly endorheic, whereas in wetter areas, vleis tend to be part of exhoreic drainage networks.

Figure 1: Google Earth image of the perennial Groenvlei in the southern Cape, South Africa, showing extensive reed beds along the northern and eastern lake margins.  The image is centered on S 34° 1’48.03″, E 22°51’17.60″. 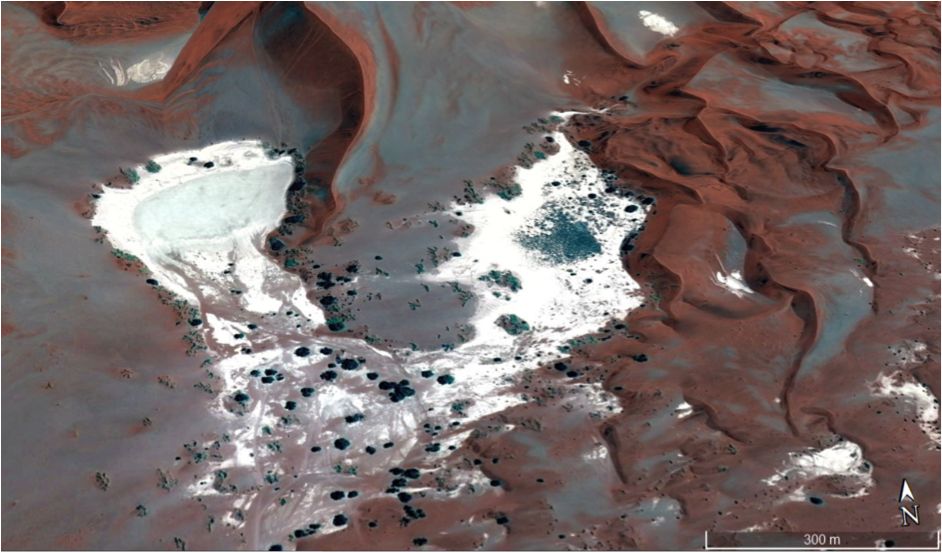 Vleis are seen as important owing to the range of ecosystem services that they provide. Vleis support important aquatic habitats for amphibians, birds (especially waterfowl), insects and – historically at least – other wildlife, including large mammals (e.g. hippopotami). Some animals are even named after their association and dependence on the permanence of green vegetation such as the vlei rat (Ottomys irroratus) (Curtis and Perrin, 1979). Intact sequences of vlei sediments can be used to reconstruct climate change records, as is the case for Vankervelsvlei in South Africa, which has a sediment and pollen stratigraphy that dates back 40 000 years (Irving and Meadows, 1997). Some vleis have protected status (e.g the Ramsar-listed Seekoeivlei in eastern South Africa – Tooth et al., 2002) but even then, many have been targeted for agriculture and grazing, leading to damage or loss of many ecosystem services (e.g. McCarthy et al., 2010).